Kristen Di Berardino is an accomplished singer, performer, songwriter and music teacher. She founded Full of Heart Music Studios to share her musical knowledge with students of all ages. She is a fun teacher with a bright and bubbly personality, and a warm, patient demeanour. Kristen structures her lesson plans according to the individuals' goals, and develops exercises around their learning styles. She is passionate about making sure her students love taking music lessons, and that they prosper. Kristen's own artistry is always done from the heart; as is her teaching, and this inspired the music school's name.

She started playing music at the tender age of 5, when she first placed her small fingers on a piano. After a few years of lessons, she gave up the piano as she didn't enjoy practising and felt it was too hard. However, as she got older she realised that although practising was difficult at times, bit is necessary to improve and succeed. She didn't realise it back then, but undertaking music lessons as a child opened up a gateway into her musical career that she didn't expect. She went back to taking piano and singing lessons as a teenager, and developed her craft by writing original songs. Kristen spent five years learning vocal technique and songwriting from ‘Young Talent Time's’ Steven Zammit. She wrote many heart felt songs in her teenager years, and started to perform and get noticed in Melbourne singing competitions. She also performed regularly at her high school whilst completing her VCE.

Kristen went on to study music performance at the Box Hill Institute of Performing Arts. She improved her skills in vocal technique, songwriting, improvisation, music theory and many more subjects which helped develop her as a musician. She now carries a Bachelor of Applied Music (Performance) majoring in vocals. Whilst studying music, Kristen was able to collaborate with many other artists, network, and joined several bands where she displayed a high level of singing and stage presence. She started performing in rock bands, but then expanded her repertoire to include pop and soul music from the 50s to the current top 40. She gained performance experience in various styles and situations, including singing in an 8-piece Motown band, and as a backing vocalist for solo artists.

Whilst undertaking her Bachelor’s Degree, she released her first solo EP
‘Let the Music Never Die" in 2009. The songs on her EP take the listener through a journey with raw vocals and melodic piano accompaniment. When performing as a singer/songwriter, she is often described as ‘Soulful’ and ‘Unique’. Kristen was a semi-finalist in the 2014 World Championship of Performing Arts in Los Angeles. WCOPA is known as the only ‘Olympics for the Performing Arts’. She was fortunate enough to be selected to represent Australia and join the 42 other countries competing. She won a silver medal for her involvement in the group song and dance production, as well as a bronze medal for her original song "Drowning in Your Arms". She had the opportunity to perform with some of the best singers and performers from all over the world, and learn even more skills.

Kristen is currently a professional singer and performs at Melbourne weddings, private functions, and corporate events, whilst continuing to write and perform original music. Her most recent project is the duo ‘Crimson Heart’ which combines soul, rock and hip hop. They released their first EP in 2018 and are currently writing new music to accompany an album. Kristen completed her Level 1 and 2 course in Estill Voice Training (Figures for Voice Control and Figure Combinations for Six Voice Qualities) in 2010, and again in 2015 to thoroughly understand the work of Jo Estill. She also completed her ‘Certificate in Figure Proficiency’ in 2013. In undertaking the certification, Kristen was confidently able to individually control each area of the vocal mechanism such as larynx height, velum, cricoid cartilage, thyroid cartilage, jaw, lips and many more, using the Estill Voice Print program. She also confidently demonstrated that she can sing in various voice qualities such as Belt, Twang, Falsetto and many more.

As well as working with students from ‘Full of Heart Music Studios’, she is also a teacher at St. Francis of Assisi Primary School and has a lot of experience working with children. She has worked with special needs students, and those who have limited attention spans, so she knows how to keep them engaged. Kristen is also a full member of the Victorian Music Teachers Association.

Anyone can learn to sing or play an instrument, and a patient approach is always best. Kristen motivates and inspires students to do their best and achieve their musical goals. 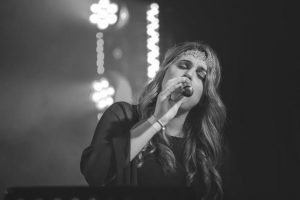 Bonnie Heffernan is a versatile and compelling young musician living and performing in Melbourne. Her passion for music began at a young age, studying piano at the age of 5 and discovering her passion for singing at the age of 8.  All throughout her schooling years she participated in extra curricular musical activities, such as being apart of school choirs and theatre productions such as FAME. As a multi-instrumentalist she has performed at local and regional pubs, clubs and bars on regular occasions performing in her band ‘Until Further Notice’.

In 2016 she was given the privilege to play for renowned Australian entertainer Rhonda Burchmore at a local charity function in Griffith NSW. She has also been commended in her involvement in the SeaFMs Discovered singing competition in Sydney in 2012, advancing through to the grand final. Bonnie Heffernan relocated to Melbourne in 2015 after graduating from Marian Catholic College in 2013 to complete a Bachelor of Contemporary Music at the Australian Institute of Music. It was there that she discovered her love of jazz whilst being tutored by some of Melbourne’s most respected musicians. Bonnie graduated from the Australian Institute of Music with a Bachelor of Contemporary Music. 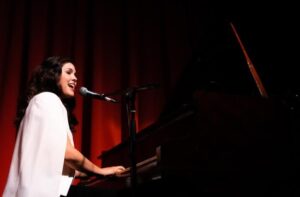 Kimberley Heberley is a teacher, artist, professional musician and actor. She works extensively as a performing and recording artist, musical director, corporate musician and session musician.

Kimberley has over eight years of teaching experience. Having forged a unique and individual path, she brings deep industry-based knowledge as well as fundamental techniques which underpin the art of music. She loves to inspire students of all ages on their musical journeys and her students respond well to her bubbly nature.

Kimberley is currently undertaking study of BA Music Industry at RMIT and is a graduate of the WA Academy of Performing Arts (Advanced Diploma of Contemporary Music), AMEB trained in both theory and classical piano, participant of Melbourne’s music industry mentorship program The PUSH, and classical acting graduate of Acting Performance Studio.

As an artist, Kimberley is an accomplished singer/songwriter of national and international acclaim. She released her debut EP “Welcome To Melbourne”, independently booked and toured with Samantha Jade and won multiple trophies and industry awards during her time competing and performing at the World Championship of Performing Arts in Los Angeles.
She’s worked opposite Grammy nominated songwriter Sarah Aarons, collaborated with industry professionals including production duo “MSquared” (Michael Delorenzis & Michael Paynter), Ralph Carr Management, Joel Quartermaine (Eskimo Joe) and Mark Seymore (Hunters & Collectors) and was mentored by Phoebe Baker (Alpine) as part of the PUSH Melbourne music mentorship program.
She has also performed extensively, from live music venues, festivals and events to televised shows including “X Factor” and “Telethon”.

As a musician, Kimberley has worked as a musical director for Anthropocene Theatre Company, performing “Something Unspoken” by Tennessee Williams to sold out shows as part of Melbourne’s Fringe Festival and composed the music to “The Will” by Daniel Nellor.
As a session musician she’s worked opposite Australian artists such as Shannon Noll and Dami Im and collaborated with Australia’s most successful non-televised talent showcase "Fast Track”. She’s also professionally contracted by Australia’s premier corporate entertainment production companies including Apple and Pears Entertainment.
Kimberley’s passion for musical theatre has led her to accompanying casting workshops with musical theatre veteran Damien Chambers and productions such as “Little Shop of Horrors”, “Grease” and “High School Musical” with Acting Performance Studio.
Kimberley is a member of APRA and Music Victoria. 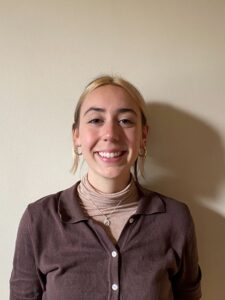 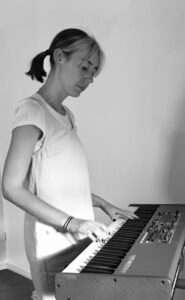 Maree Pearson is a pianist/saxophonist and music enthusiast originating from Canberra. Maree has been involved in music all her life starting at age 5 with learning piano, and has never looked back since. Throughout all of her schooling years, Maree has continued to pursue a passion of music through involvement in ensembles, bands and all music related co-curriculars. Whilst classically trained through AMEB examinations (8th Grade), she also shares a large interest in a wide range of genres, implementing this into playing and teaching. Maree moved to Melbourne in 2019 to continue her love for music and is now in her final year of a Bachelor of Arts in the Music Industry at RMIT.

Maree prides herself on ensuring that all students have the most enjoyable time possible in their lessons. She finds teaching highly rewarding as it grants the opportunity to pass on an understanding, passion and education of music to students, something that she believes everybody should have access to. Maree works hard to make lessons a fun and inviting space to appreciate the joy of music and what it can bring to students of all ages and abilities. 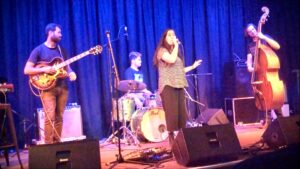 Indu Mulligan is a singer and pianist who has a passion for teaching and performing. She has a particular love for performing jazz and contemporary music, however, enjoys teaching a diverse range of styles and genres. Indu has been singing and playing the piano since the age of five. In primary school she was involved in choirs such as ‘The Boite Schools Chorus’ and did many performances at school fetes and concerts. She would sing while accompanying herself on piano and ukulele. She continued performing throughout her high school years in several bands, choirs, acapella groups and theatre productions. In her later years of high school, she completed VCE music, while also completing AMEB examinations for piano.

In 2020, Indu completed her Bachelor of Music Performance specialising in Jazz and contemporary singing at Box Hill Institute, where she achieved high distinction grades for her end of semester recitals.

Indu believes every student has a unique musical skillset and strives to build confidence and passion within her students. She has a fun and varied approach to her lessons and emphasises musical creativity with her students. 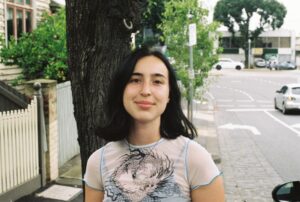 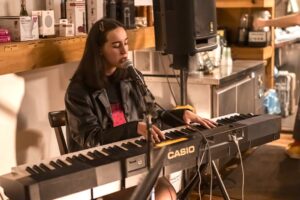 Adelaide is a primarily a singer/songwriter recording and producing originals for distribution on an array of platforms. Her music is defined by its rich lyrical content, cinematic soundscapes and layered harmonies. Over the past few years she has completed a bachelor of music majoring in composition and minoring in performance as well as releasing her first album including a number of singles. She has also been performing live, both with a band and solo for the past few years, and hopes to pursue this further in the future. Another of her passions is video production, devising videos to accompany her musical work.

Adelaide has studied music from an early age, pursing classical piano and jazz/contemporary voice, with voice becoming the focal instrument of her degree. From over fifteen years of experience with numerous music teachers and vocal coaches she has drawn a wide variety of methods that now inform her teaching. Adelaide likes to hone in on technique as well as creativity, whilst helping to nurture a passion for music in both herself and her students. Her interest resides in student-driven learning.